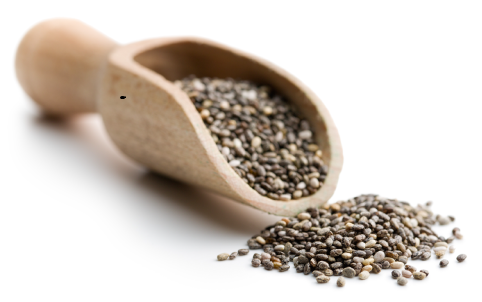 Many of us today primarily relate the word “chia” to the once famous pet plant that took the retail industry by storm in the 1980’s.  A clever ram shaped object that grew sprouts became a trendy gift idea, changing the face of Christmas for several years.    Nowadays, the term chia, which is a species of flowering plants in the mint family, is a respected appellation and has been referred to as a “superfood” in this growing health conscious community.  The popularity of chia has caught wind with formulators and food manufacturers and they are running with it, adding chia seeds to products such as granola bars, breakfast meals on-the-go, dry cereals, crackers and breads.  It seems you can’t venture down a supermarket aisle these days without seeing “CHIA” plastered over a number of name-brand products.

Why have chia seeds become such a movement and what does this mean for the customers of Jedwards International?  Chia seeds are a natural source of antioxidants, but more importantly, are a vegetarian source for Omega-3 fatty acids.  It offers a tasty option for vegetarians, vegans, and those averse to eating fish to obtain essential Omega-3 fatty acids in their diet.

In early 3500 B.C., the Aztecs consumed chia seeds as a main ingredient in their diet; the little white and black seeds were dined upon raw or mixed in flour and drinks.  Between 1500 and 900 B.C., Chia was harvested in the Valley of Mexico and became a main dietary component for the Mayans.  In fact, the Mexican State of Chaipas’ literal translation is “river of chia”, indicating chia has long been a crop in that region.  When Spanish
conquerors set down in the new land in the 1500s, they repressed the natives and many crops were banned by the Spanish. Because Chia was offered to the gods during religious ceremonies, Chia was deliberately eliminated.    “Chia” means “strength” in Mayan which most likely stems from the energy these seeds provide.  Nowadays, the trend has resurfaced and consumers are cleverly adding chia seeds to all sorts of delicious meal options – on top of salads, in smoothies, and sprinkled on children’s snacks.

Jedwards proudly supplies Virgin Organic Chia Seed oil, a novelty oil that is flying out the door to formulators around the country.  Chia seeds, Salvia hispanica, yield roughly 25-40% extractable oil and a very stable and nutrient dense oil, due to its natural composition.  It is awe inspiring when you take a handful of organic chia seeds next to a bulk container of organic chia seed oil and consider how all that golden nutritious oil was pressed from such tiny seeds.  Chia seeds yield oil that have an ideal 3 to 1 ratio of Omega-3 and Omega-6 fatty acids.  Not only is bulk chia seed oil being used as an ingredient in the nutraceutical and food industries, but it is also commonly found in popular cosmetic products today.  Chia seed oil is an exceptional oil to use topically due to its natural moisturizing and emollient properties.  Cosmetic contract-manufacturers use this ingredient in everyday skin-care products such as lip balm, lotion, and face serums. Contact a Jedwards International representative for more specialty oils being added to help your brand stand out in the marketplace.