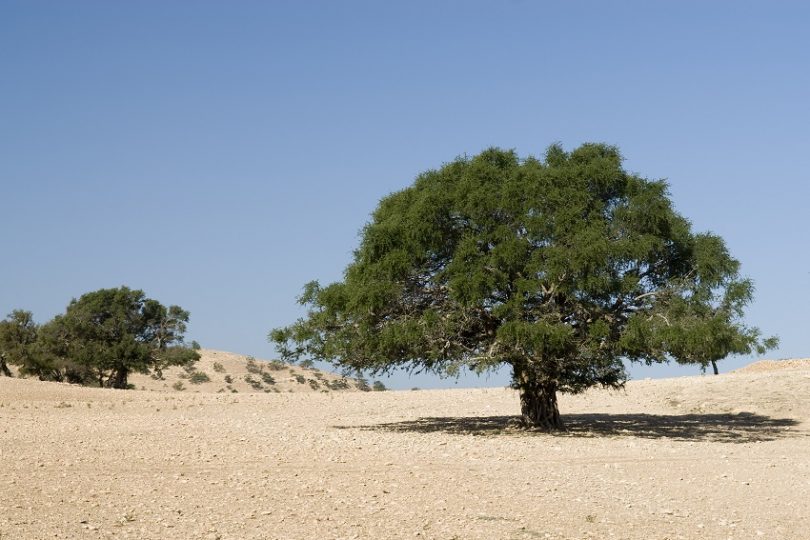 The fruit of the Argan tree, endemic to Southern Morocco, has enjoyed hundreds of years of locally celebrated usage, unbeknownst to much of the rest of the world.  The Berbers, an ethnic group indigenous to North Africa, have used the fruit of this “Tree of Life” as a source of food, charcoal, firewood and building material for centuries.   It hasn’t been until the last two decades that the oil pressed from this source has taken the cosmetic world by storm.  The manually intensive process of cracking the green fruit completely open to extract the kernels is often thought of as an onerous task; argan fruit is ranked as one of the hardest nuts in the world.  The laborious extraction and pressing process results in an oil rich in anti-oxidants and vitamin E and consists of 80% of fatty acids.  It is rich in oleic acid, palmitic acid, stearic acid and linoleic acid, all of which are beneficial for the skin.

Jedwards International, a bulk wholesale supply company located in Braintree, MA,  takes great comfort in knowing that the methods used to harvest and press oil from this precious fruit is done in a manner to ensure sustainability of not only the fruit of the tree, but of the Argan tree itself.  Recognized in 1998 under UNESCO’s World Heritage Endangered List, the Argan forest has been revered and acknowledged as a biosphere reserve, where 21 million trees covering more than 800,000 hectares, are a continued focus of conservation.  Through research and attention to rescue of the forest, it is now known that Argan trees live 200 years and are a bastion against desertification, which is the depletion of plant life and loss of topsoil at desert boundaries.  With its long and hardy root system, the Argan tree is firmly anchored in the ground which makes it resistant to strong winds and protects the soil from erosion.  The Argan tree in Morocco’s severe growing conditions tenaciously survives and thrives, even with obstacles that sometime threaten the efforts of local farmers and harvesters of the Argan nut.

Focus on the preservation of the forest was not always the case.  During the 1970’s, many of the trees were felled to be utilized for charcoal for fuel and to make way for other crops.  It then became an uphill battle for local Argan tree proponents to keep legions of branch hopping goats from interfering with the supply of maturing fruit.  Getting local people involved is the key to sustainability and keeping those pesky goats out of the trees until after the maturation and harvest of the fruit is an ongoing objective.  Therefore, it has become important to educate the population on the importance of the rescue of the Argan forest and the safeguard of Argan fruit to not only protect their livelihoods, but to preserve their countryside as well.

Jedwards’ suppliers of Argan Nut Oil, both Virgin Organic and Deodorized Virgin Organic,  have supported women’s co-operative initiatives to improve income producing sources as well as contribute positively to the community and the environment.   In addition, they have pledged to give a percentage of their turnover for every kilo of oil sold to programs created to educate the local population on the necessity for the longevity and existence of Argan trees.

Argan oil is probably most notably used locally as a staple of the Berber diet.  Usually eaten on bread, the Morocco population uses Argan oil to create a spread called “amlou,” which consists of a sweet oil and almond paste, similarly consumed much like the North American affection for peanut butter.  Argan Nut Oil has also increasingly been used in numerous cosmetic formulas due to its moisturizing qualities.  The oil is used in cosmetic care products for skin, hair and nails and in the culinary world for its deep nutty flavor.  The sustainability of the propitious Argan tree is an effort that Jedwards International and its suppliers are proud to be a part of.