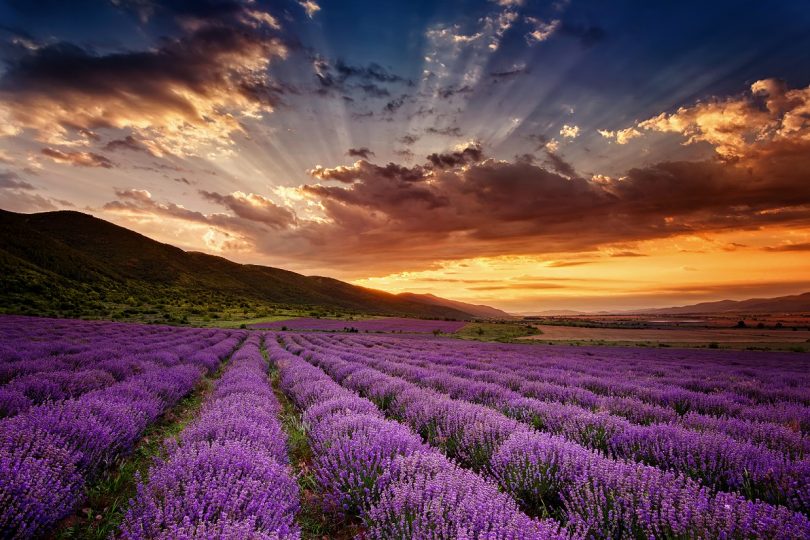 Lavender is a popular scent, considered to be a must-have ingredient in a formulator’s repertoire of essential oils.  Its aromatherapeutic qualities have been cherished throughout the world for thousands of years.  Lavender is one of the most popular and best adapted perennial flowering plants in the world.  This bright purple flowering plant of the mint family is known for its sweet, floral fragrance and multiple applications.  The name lavender is derived from the Latin lavare, meaning to wash.  Historically, Greeks and Romans applied it to their bath water, beds, clothes and hair.  Evidence exists that ancient Egyptians used lavender oil in their mummification process.

In the early 20th century, a French perfumer by the name of Rene-Maurice Gattefosse widely used lavender as he was culminating the brand new concept of aromatherapy.  Reportedly, Gattefosse badly burned his hand during an experiment and plunged his hand into the nearest available vat of liquid, brimming with lavender oil.  He observed his hand healed quickly and with little scarring.  This blossomed into an active research of the benefits of lavender, as well as other essential oils.

Lavandula is a genus of 47 known species, however the species used in our Organic Lavender Oil (E1080) is recognized by its botanical name Lavendula angustifolia.  If that isn’t confusing enough, the botanical name for our Lavender Oil, Bulgarian (E1076) is Lavendula angustifolium L.  But wait, there’s more.  Many customers are surprised to hear of another, lesser known lavender oil option that we often recommend: Lavandin Oil, Grosso Organic (E1065).  Lavandin oil is steam-distilled from the flowering tops of a hybrid plant of two species of lavender.  With so many options in the lavender oil market, let’s take this opportunity to delve into the nuances of each lavender oil. Sometimes called “True” or “English” lavender, despite country of origin, Lavendula angustifolia has a small barrel-shaped flower cluster on shorter stems.  It requires higher elevations, is more difficult to grow and is more susceptible to disease.  This steam distilled essential oil contains sesquiterpenes, monoterpenes, and linalool.  In combination, these components lend its oil a floral fragrance that can be described as both sweet and spicy.  Both our Organic Lavender (E1080) and Lavender Oil, Bulgarian (E1076) are sourced from Bulgaria.  The only real difference between the two is the fact that Organic Lavender is organic certified with a slightly higher price point.  From an aroma standpoint, there is not a major difference, with the exception that lavender can fluctuate quite a bit from lot to lot so there will likely be some ongoing differences with each new resupply that arrives.

Lavandin Oil, Grosso Organic (E1065), known by its botanical name Lavendula hybrida, is a cross pollination of two individual species of lavender: Lavendula angustifolia and Lavandula latifolia.  Grown and sourced from France, Lavandin Oil, Grosso Organic was naturally cultivated when the two species met in a close proximity growing space at about 1800 feet up on the mountain. The end effect is Lavendula hybrida, which produces more oil than angustifolia, approximately 3 times as much.  It should be no surprise therefore that lavandin oil is more economical than lavender oil.  As far as the matter of fragrance, lavender oil has more of a camphor quality which gives the lavandin oil a bit more of a gutsy, medicinal, less refined scent than the traditional lavender.

It is recommended to request a sample if you can prior to purchasing essential oils with several variations, especially those as close in similarities and functionality as the various lavender oils supplied and distributed here at Jedwards International.  Feel free to contact a sales representative at (617) 472-9300 for specific questions regarding these ingredients, or requests for documentation or samples.