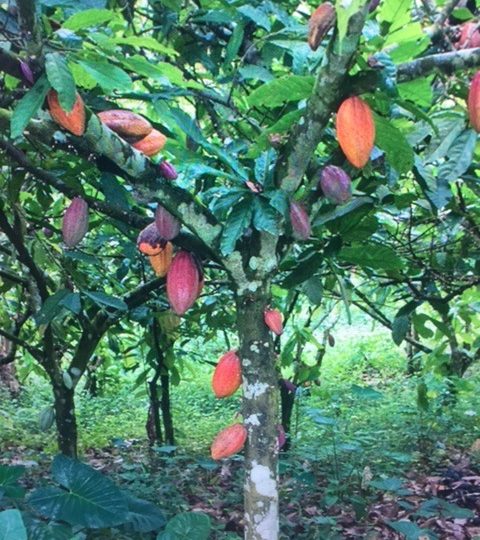 There have been numerous studies done over time to ascertain how chocolate consumption impacts humans.  One such study at the Human Olfaction Laboratory at Middlesex University concluded the smell of chocolate triggers positive reactions and may improve your mood.  I ventured into the breakroom at Jedwards International and opened a container of Jedwards 70% Bittersweet Organic Chocolate Wafers to test this theory.  As I closed my eyes and inhaled, a feeling of contentment and joy warmed me to the core.  In this case, the proof is in the chocolate! While there is some debate about the actual date for the discovery of chocolate, it has been documented that cacao beans were so valuable to early Mesoamericans that they were used as currency.   A single turkey hen could be purchased for 100 cacao beans!  Another popular practice called for the beans to be fermented, roasted, ground and combined with spices and honey to create a bitter, frothy beverage; “beer” circa 1900 B.C.  Aztec traders filled woven backpacks with cacao and then hauled it on foot to the Aztec capital, Tenochtitlan, today the site of Mexico City.  Warriors often accompanied traders to protect against thieves that perused and hunted traders along the trails.  The Olmec, Mayan and Aztec civilizations found new perks from recipes derived from cacao beans. Historical accounts indicate the 16th century Aztec emperor Montezuma drank three gallons of chocolate a day to increase his libido.  Others living in that era considered chocolate to be an aphrodisiac and mood enhancer.  Mayans have been documented as honoring a god of cacao and serving chocolate to rulers, warriors, priests and nobles at sacred ceremonies.

As time progressed, chocolate made its way into Europe after Spain invaded South America and discovered the coveted delicacy.  For the next 200 years, European political powers struggled for control of the “new” lands of America brimming with desirable natural resources.  Spanish conquerors set up a system of forced labor in which native people worked the lands the Spaniards now controlled, creating a slavery society to harvest cacao.  This practice continued for hundreds of years.  In Spain, with cacao now nestled securely in their homeland, experimentation on cacao evolved and the bitter drink was altered by sweetening it with cane sugar and cinnamon.  Chocolate became a delectable symbol of luxury, wealth and power as only the wealthiest elite could afford the increasingly expensive import.  The secret was safe, nestled within Spain’s affluent sector for nearly a century.  In 1615, King Louis XIII of France married the daughter of King Phillip III of Spain, Anne of Austria; herself a chocolate aficionado, who brought her love of chocolate with her to her new home in France.

Fast forward to the Industrial Revolution where technological, socioeconomic, and cultural changes made mass production possible, reducing the need for human labor and increasing production capacity in shorter amounts of time.  Hence, cocoa extraction became even more accessible.  An English company in 1847, J.S. Fry & Sons, combined cocoa butter, cocoa powder and sugar to create the first ever solid chocolate bar.  The invention of the conching machine by Rodolphe Lindt in 1879, upgraded the texture and improved the taste to result in an end product that was exceptionally superior.  Cadbury, Hershey and Mars followed suit not long after which ushered in a chocolate boom, leading to an annual consumption today of more than $75 billion worldwide.

With such a colorful history, one’s curiosity can only continue to be piqued; the motivation behind this Jedwards’ blogger venturing into Boston’s Museum of Science to view “Chocolate, the Exhibition” on a rainy Saturday to discover the complete story behind the tasty treat.  To fully understand chocolate and its deep roots, one must first appreciate the perfect environment for Theobroma Cacao, the taxonomic classification for the plant, to flourish.  Ideal for cacao tree growth are conditions found in tropical rainforests in Central and South America, with moist soil and shady overgrowth, where trees attain impressive heights of anywhere from 10 – 40 feet.  The fruit of the tree, called a cacao pod, consists of almond size seeds surrounded by pulp and encased in a hard shell.  Nearby wildlife, which include monkeys, rodents and birds, break into the cacao pods to eat the sweet pulp.  They spit out the bitter seeds, spreading them around on the ground to germinate.  The seeds, deliberately overlooked by wildlife, can attribute their bitter taste to the theobromine component, but are simultaneously packed with nutritious oils, starches and protein as well as caffeine.  Each cacao pod contains 30 – 50 seeds, enough to make 7 milk chocolate bars. What exactly is the process to create delicious chocolate from the imposing seed?  There exist 7 magical steps to get this bitter cacao seed prepped and transformed:

The sky is the limit for creative ways to involve organic bittersweet chocolate, cocoa powder, cocoa butter, nibs and liquor into your repertoire.  Manufacturers and formulators alike add Jedwards International cocoa products to their formulations and recipes to create highly desirable end products.  Recently, Julie MacQueen, Founder/CEO of Pure 7 Chocolate had this to say about Jedwards:  “We LOVE Jedwards organic cacao products! Our Pure7 chocolate is sweetened only with honey, so it’s a lot more finicky than the average chocolate loaded up with sugar and lots of other not-so-great stuff – we have tried lots and lots of different cacao products, and Jedwards cacao products work as well for us as anything else we have used!”

In addition to supplying superior materials, our cocoa products are gluten free!  Nutrition formulators and nutraceutical companies utilize these materials in various products such as gluten-free energy bars and chocolate protein drinks, among many others.   Visit https://bulknaturaloils.com/chocolate-cocoa.html to find out more about Jedwards’ International Cocoa Products or call (617) 472-9300 to speak directly with a member of Jedwards’ Sales Staff to place your order today.