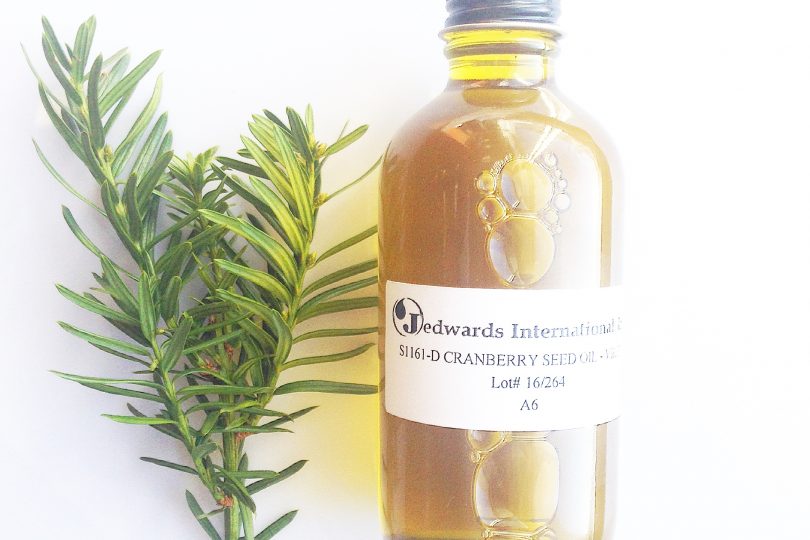 “I made cranberry sauce, and when it was done put it into a dark blue bowl for the beautiful contrast.  I was thinking, doing this, about the old ways of gratitude: Indians thanking the deer they’d slain, grace before supper, kneeling before bed.  I was thinking that gratitude is too much absent in our lives now, and we need it back, even if it only takes the form of acknowledging the blue of the bowl against the red of the cranberries.”   ~ Elizabeth Berg

With Thanksgiving just behind us and the holidays right around the corner, it’s only natural that thoughts of turkey, mashed potatoes and cranberry sauce are on our minds inspiring warm reflection.  While cranberries are certainly delicious, they have a multitude of other uses.  Jedwards International is pleased to announce the addition of Virgin Cranberry Seed Oil to our extensive product list.

In North America, indigenous people were the first to use cranberries as food and dye. Native Americans, long before the Pilgrims arrived, mixed deer meat and mashed cranberries to make pemmican; a

convenience food that kept for long periods of time.  In 1550, there is an historical account of Europeans coming ashore and being met by Native Americans bearing bark cups full of cranberries.  In Plymouth, MA there is a 1633 account of the husband of Mary Ring auctioning her cranberry-dyed petticoat for 16 shillings.  Fun fact – that converts to about $50 today!  A 1663 Pilgrim cookbook appears with a recipe for cranberry sauce.  And in 1667, New Englanders sent across the pond to King Charles ten barrels of cranberries, three barrels of codfish (which is used in , another product that Jedwards International is a bulk supplier of), and some Indian corn.

Some other fun facts about cranberries…German and Dutch settlers take credit for the naming of the fruit, referring to them as “crane berries” because the vine blossoms resemble the neck, head and bill of a crane.  The hardy cranberry vine thrives in conditions, such as acid soil and low temperatures, that would not support most other crops.  The cranberry is one of only a handful of fruits native to North America, included among blueberries and Concord grapes.  And during World War II, American troops required about one million pounds of dehydrated cranberries a year, keeping the US troops well nourished.  Cranberries are sometimes used to flavor wines, but do not ferment as naturally as grapes, making them unsuitable for the traditional winemaking process.

The cranberry seeds used in our wholesale, bulk oils are grown and harvested in the Quebec, Canada region and are prepared with 100% natural, non-GMO ingredients.  The oil is extracted from both conventional and organic cranberries using a cold pressed expeller, creating a clear, golden color with a subtle, fruity aroma.  There are no solvents or chemicals used in the preparation of our Cranberry Seed Oil.  Cranberry Seed Oil is an emollient and can be added to various beauty and body products to help promote healthy skin.  This virgin oil has a balanced ratio of omega-3 to omega 6 fatty acids, making its natural absorption into the skin unique among plant oils.