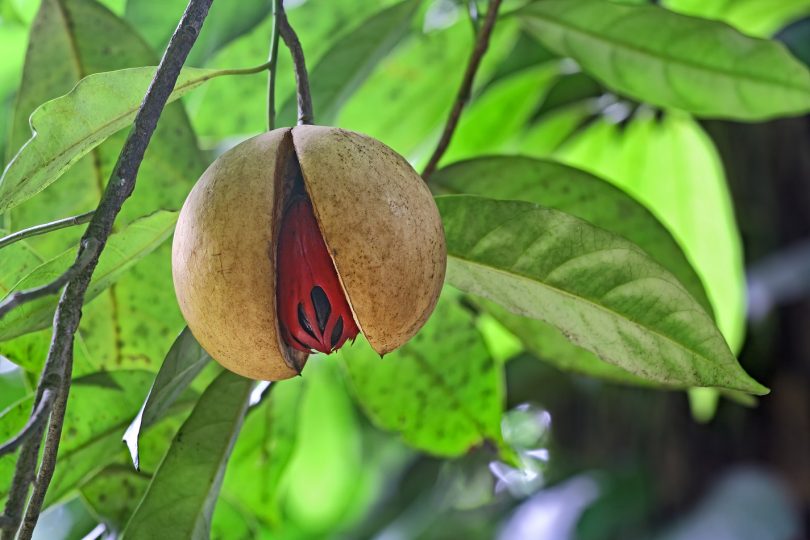 Available now is the ever-popular essential oil, Nutmeg Oil – item # EHM1105, which can be purchased in pack sizes of 16 fluid ounces and 3.4 kg gallons.  Nutmeg oil is derived from the seed of the Myristica fragrans, an evergreen known as fragrant nutmeg or true nutmeg.  The nutmeg tree grows as tall as 70 feet but it can take 20 years before a young tree reaches full production of fruit.  Bulk nutmeg oil is steam-distilled from the dried seeds of the tree’s fruit and is widely used today as an additive in natural dental products and cosmetic formulations in crafted soaps, topical skincare products, or as an added ingredient in beverages such as herbal teas. Nutmeg oil is commonly used in aromatherapy and combined with various carrier oils.  It has been sought after for its believed natural health benefits and therapeutic properties since the early days of the Spice Trade.

A little look into the history of Nutmeg… A staple in Ayurvedic medicine, nutmeg fetched high prices during the Middle Ages when the location of nutmeg was kept very secret.  Throughout Europe, nutmeg was believed to aid in curing the plague, allowing traders to capitalize on people’s fears and charge significantly inflated prices.  It was also highly valued for its ability to flavor foods and mask the scent of rotting meat which was a common odor prior to refrigeration.

During the early fifteenth century, European settlers travelled the globe in search of spices like nutmeg due to its believed medicinal benefits and its role in ancient Egyptian embalming rituals.  In 1647, massive deforestation of nutmeg trees in the Banda Islands, where the nutmeg tree was once found exclusively, threatened the nutmeg trade, leading to a proposal for land trade.  The Dutch traded Manhattan (yes, the main island of NYC), which was at one time called “New Netherland,” to the English for the Nutmeg-rich Island, Run Island, one of the smallest islands of the Banda Islands, a part of Moluccas, Indonesia, by way of the 1674 Treaty of Westminster.  This allowed the Dutch to maintain a 200-year monopoly on the nutmeg trade, in addition to the treaty ending the Third Anglo-Dutch War and allowing Britain to officially claim New Netherland, or Manhattan as we know it, which it had already occupied illegally since 1664.

In 1809, the English returned to Indonesia and seized the Banda Islands.  Before returning the islands to the Dutch in 1817, they transplanted hundreds of nutmeg seedlings to plantations of India, Sri Lanka and Singapore, bringing the Dutch monopoly on nutmeg to a screeching halt, never again to dominate European commerce.

Today, bulk nutmeg oil is used for multiple believed benefits, both for mental and emotional wellness as well as physical health.   Nutmeg is also a versatile ingredient in cooking, added to a variety of dishes.  In the cosmetic industry, due to its natural antiseptic properties, it’s an added ingredient in soap, lotion, and cream formulations.  Given its appealing aroma, bulk nutmeg oil can be found in a number of household and industrial products such as room fresheners.