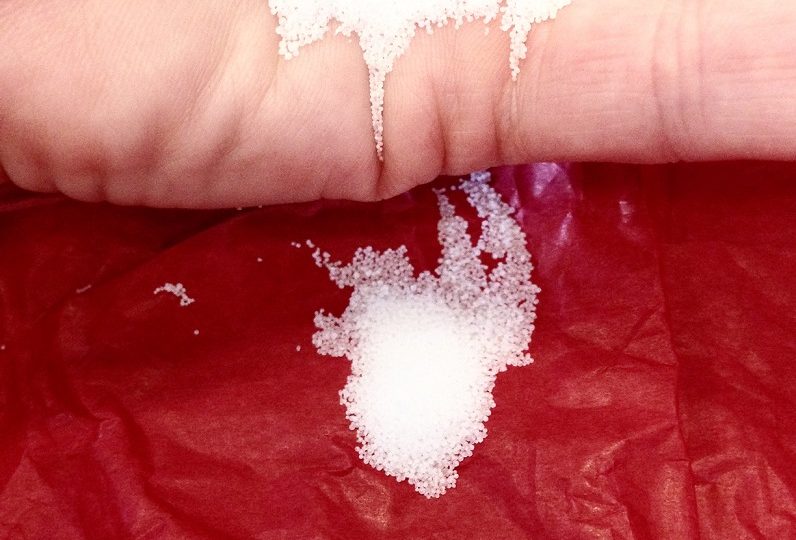 I have always been fascinated with Jojoba, my enchantment extending far past its pronunciation, “hə-ˈhō-bə”.  Extracted from seeds of the jojoba plant, this carrier oil is different from other seed oils in that Jojoba Oil is a mixture of long chain monounsaturated liquid wax esters, whereas other seed oils are made of triglycerides.  Read on.  It’s going to get exciting.

This relatively stable liquid is available in a pure, single filtered version, with a bright, golden color or a triple filtered, bleached version (using all-natural diatomaceous earth) which is a clear, transparent material.

Historically, sperm whales were hunted for their oil, which is comprised of 90% wax esters.  In the 1960’s, marine life research conveyed an alarming fact.  Sperm whales were becoming endangered.  An alternative was actively sought out and Jojoba Oil was not only discovered, but declared a superior oil to sperm whale oil, also known as squalene.   Sperm whales worldwide rejoiced.

Jojoba Oil gained popularity in the cosmetic industry due to a myriad of factors.  Jojoba Oil is structurally and chemically similar to the human sebum.  It has a high content of beneficial minerals and tocopherols, and wondered what else they could unearth with this wonder plant.  An experiment which treated the filtered and bleached jojoba oil with hydrogen, in a process known as hydrogenation, resulted in Jojoba Beads.  These free-flowing, homogeneous, microspheric particles are odorless, tiny white beads.  But why has the exploration of Jojoba Beads been so revolutionary to the personal care and cosmetic industry? The key to healthy, soft, glowing skin is exfoliation.  Exfoliation is the removal of dead skin cells on the outer most layer of the epidermis, which is the layer that provides a waterproof barrier and creates our skin tone.  Exfoliation can be obtained in a couple of different ways; either chemically with substances such as glycolic acid or physically by applying an abrasive material to the skin.  Jojoba beads, with such a delicate, smooth spherical shape, is a wonderful option to slough off dead skin cells without creating microscopic tears on the skin’s surface.

Just as Jojoba Oil created an eco-friendly alternative to the killing of sperm whales, Jojoba Beads have similarly provided a going green option for exfoliation materials in cosmetic products.  Thankfully, they are rapidly

replacing Microbeads.  Microbeads are a plastic material used in scrubs and soaps for exfoliation purposes that get washed down the drain after use.  They can then be found flowing through sewer systems and wastewater treatment plants, which are unable to filter the beads due to their small size.  In April, 2015, studies on New York wastewater treatment plants found that nearly three quarters of the treated water contained microbeads!

The beauty of natural Jojoba Beads is they are biodegradable!  Use of Jojoba Beads results in the material decomposing once it’s flushed down the drain.  Jedwards International is dedicated to promoting environmental, economic and social impacts through higher standards in societal practices.

Jojoba Beads can be added to soap and body scrub formulations as a safe, but effective exfoliant.  We are pleased to announce we will be adding Jojoba Beads to our product list in January, 2018.  Contact a Jedwards International sales representative at (617) 472-9300 for pricing information, request a sample or to place an order.